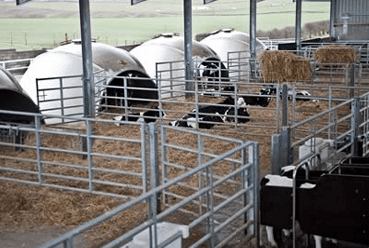 Due to the brilliant reception received previously at the Winter Fair, the Live Calf Rearing Demonstration will be making a return for the 2017 Show.  Gorteade Cow Care owned by Barry O’Loughlin will be displaying a fully functioning calf igloo with veranda and Heatwave ad lib calf feeder.

Barry in partnership with his father milks 135 cows with two Lely robotic milking machines that were installed in 2008.  Barry and his father went on the search for an effective calf housing system as they had concerns surrounding pneumonia and calf mortality.  After travelling to the UK they decided on the H&L Calf Igloo system, which has an open sided veranda with free access to a fiberglass calf igloo.  Commenting on the improvement on their own farm, Barry said, “There has been a marked improvement in calf health resulting in vaccination and treatment costs disappearing.  The time spent on bedding and cleaning out has also reduced considerably which is a fantastic help on a busy dairy farm like ours”.

Barry formed Gorteade Cow Care in 2006, which sells a wide range of products including Schurr Cow Brush, Easyfix rubber, Cosy Calf Coat and Heatwave Milk Warmers ad lib calf feeder.  All of the products will be on his stand at  this year’s Winter Fair.  Having seen the success of calf igloos on his own farm Barry was quick to add them to Gorteade Farm Care’s portfolio.

The H&L Calf Igloo, which will be demonstrating at Winter Fair, originated in Germany and they are now widely used throughout G.B. and Ireland.  Their unique design provides a suitable home for calves during their first three months, offering a draught free environment inside the igloo as well as outside space in the veranda.  The dome shape and central chimney ensures frequent air changes hence promoting good respiratory health.  Speaking on the upcoming Winter Fair Barry commented, “I am delighted to be showcasing the Live Calf Rearing at the Winter Fair, it will give the farmers a chance to see for themselves how the system works and what opportunities it could provide on their own farm”.